April is here, and with it many great new Seven Worlds news!

The books are now for sale!

Finally, after having shipped the first batch of Kickstarter backer books, I'm proud to announce that the hardcover Seven Worlds Setting Guide and softcover Seven Worlds Campaign Book are now available for purchase! If you're not a backer (or you're a backer but just want more books) there are two ways to get them:

Some early backers and team members have been posting images of the books they have received...

Came home to find two boxes of gaming goodies from @SevenWorldsRPG and @Chaosium_Inc. Two very different freelance projects, both quite fun to work on. pic.twitter.com/RFqxZMYB0v

Are you a Kickstarter backer who hasn't received your books yet? Have you filled out the Kickstarter survey and paid the shipping fees? If you haven't, check out Kickstarter updates #20 and #21 (Backers only) for shipping costs and info to get your books. Hurry, the second batch of backer books will begin shipping the week of April 16th!

Don't know if Seven Worlds is for you? Check out these great reviews!

In the last couple of weeks Antonios S, star reviewer at site RPG.NET, has made a detailed, extensive review of the Setting Guide, and another review of the Campaign Book. If you want to see whether this setting is for you or not, I encourage you to check out these reviews.

The image on the cover is something that actually happens in the #SevenWorlds #RPG campaign. Awesome? Not more than the other things that take place there, I assure you! https://t.co/eww91Ng4PU @RPGnet pic.twitter.com/qtt9cL3Ch6 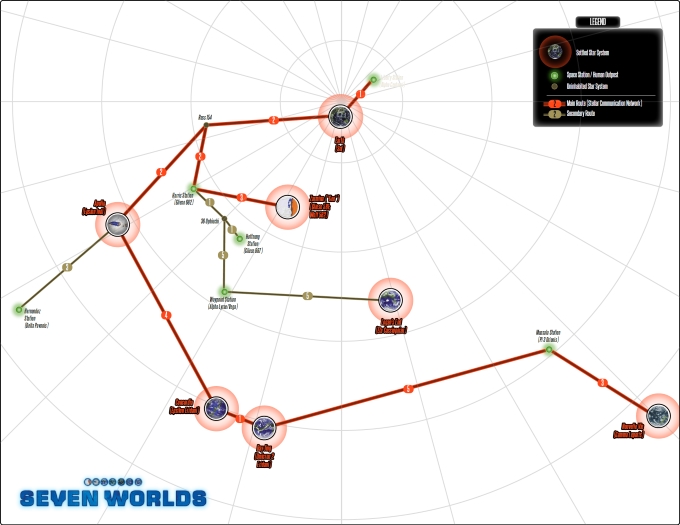 A very frequent question I receive is "how are the stretch goals going?" I therefore thought it a good idea to give you a status update.

In short, I have been devoting all of my time to launching the books, which means the real hard work on the stretch goals is about to begin. But that doesn't mean there's nothing to share!

While the full iconics backgrounds are not written yet, both their stats and general bio outline are done. Several people have been asking for extra pre-generated characters for their campaigns. I therefore am sharing the stat blocks for the two upcoming Iconics for the campaign. Expect the full character bios and images in the coming weeks and months.

Takumi: Dr. Takumi Sugiyama had a successful career in medicine until he started seeing visions of weird monsters invading the Seven Worlds. These unexplained visions (psionically-injected dreams? Or just madness?) affected him to such a degree that he lost his job, wife and daughter. On his way back to recovery, only the Circle offered him a job (why?). Besides, having the Seven Worlds invaded by monsters is something that would never happen… could it?

Amblin: Amblin is a proud Mars native (Mars is not considered one of the Seven Worlds, something that irks her tremendously). A rough-and-tough explorer/scout type, she was the last survivor of an expedition to Ross 128B. Her survival has several unexplained circumstances, which ended up in her being rescued after 20 years in a cryogenic survival unit. She’s currently 67 years old, which is not old at all by Seven Worlds standards; but the cryogenic survival pod has severely affected her health. She’s sometimes better at intimidation than at physical combat.

(note that as per p105 of the Setting Guide, Anemic is considered a Major Hindrance and gives a –1 Charisma. We're adding that –1 to the –1 for the Habit Hindrance)

The short adventure and the Fate Accelerated conversion are at this point outlined as well, and ready for me to go into the hard work of doing the actual detailed writing. Stay tuned for that as well!

Thank you for supporting Seven Worlds!

We'll soon have more stuff to share! As always, feel free to share your comments at our G+ community or Facebook page, or send me an email at luis@intellistories.com.

Amblin: Crippled survivor of a doomed expedition, and a relic from another time.

The End (of the campaign) is here!