Character spotlights help you explore Seven Worlds through the eyes of its inhabitants. These characters are fully statted and can be used by players. You can get a PDF with Takumi's full background and a detailed character sheet at our Downloads section or at DriveThruRPG or RPGNow.

This is one of the many stretch goals unlocked after the wildly successful Seven Worlds Kickstarter. Enjoy!

Dr. Takumi Sugiyama was born in Okinawa, Earth, on2179. His parents, a successful professional couple, frequently shared with young Takumi the dark tales of their own childhood in a shelter among the ruins of a devastated Okinawa in the years following the comet crash of 2133; and of the death, hunger and disease that defined life in those days. A few lucky souls managed to catch a ride out of the planet in the ships from Project Ascension, but Takumi vividly imagined the remaining survivors needing help to battle the many diseases and health problems of those days. His passion for life, health and the value of medicine began then.

After finishing school, the extremely talented Takumi applied to and was accepted at the prestigious Tsinghua University School of Medicine in the reconstructed Beijing, in former China. He graduated top of his class and joined the surgeon team of the top private clinic back in Tokyo. There he met and married the wealthy clinic owner’s daughter, Haruko; and soon she gave birth to their beautiful daughter, Saki. The ambitious young surgeon looked forward to a life of success and happiness.

Then the dreams began.

At first they appeared to be nothing but vivid, disturbing nightmares. Strange spider-like monsters, with four legs, six clawed arms and long necks ending in huge maws filled with teeth, moving along strange mucus-filled passageways bathed in a strange light. Pulsating monsters covered in a hard carapace, or winged monstrosities flying in alien darkened skies. Once he dreamt of a huge octopus-like creature sitting in the center of an enormous dome built from a flesh-like, mucus-covered substance; the creature moved its tentacles into and out of strange holes in the walls filled with a gelatin-like substance, as if playing an instrument. Then he saw thousands of these creatures walking on planets full of humans, killing at will, burning continents, covering worlds in radiation, destroying everything… And some of the dying people attacked by these creatures turned to him for help, and he healed them, because only he knew how.

He dreamt this day after day. He would wake up shaken and disturbed. He tried to laugh off the dreams, but they didn’t stop, and they were always the same. He began to obsessively focus on dreams. He became more and more convinced, without evidence, that his dreams were a message, something he should urgently understand.

And then the dreams invaded his waking time.

Takumi noticed it first when he was walking to work one day and saw one of the four-legged monsters running towards him from the far end of the street. He screamed in panic and tried to avoid it, while a small part of his mind wondered why everyone else behaved as if they could not see it. When the creature was about to crush him, it suddenly disappeared, leaving Takumi crying and trembling on the sidewalk floor.

He began seeing monsters everywhere. The creatures surrounded him at every turn, they were there, at home, at work, in the park, as if he had schizophrenia or were inside a V-World horror game.

He asked a friend who was a mental expert for help. His friend ran several tests and brain scans and found no unusual abnormalities, but he found what could be faint traces of psionic meddling. Takumi thought these visions might have been planted by someone, but who would want to do that to him? Plus, he did some research and found there is no known psionic power that could create this kind of dream (puppet and other minor powers have been shown to put ideas into people’s heads, but nothing could do something at the scale of what Takumi was seeing). Could Takumi’s visions be caused by the side effect of some psionic power close to him?

Despite one or two awkward moments, Takumi had so far been able to hide his situation from almost everyone around him. His wife Haruko knew about his dreams but he kept his day visions a secret from her; the high-society, everything-is-for-image Haruko would probably be more concerned about how having a ‘crazy’ husband would make her family look than about Takumi himself. So he kept the his problem as secret as he could.

Then one day he was performing a high-risk surgery on a patient, when the doors to the operating room burst open and a particularly huge creature jumped to attack him with its horrifying maw. He screamed, acting on reflex, and when he regained control of himself saw the blood-covered corpse of the patient that he had blindly killed while he was “defending” himself from something that wasn’t there.

His secret was discovered, he was shamed and fired as a doctor. The investigation unearthed the tests his friend had made on him, He was diagnosed as mentally ill and interned in a sanatorium while awaiting trial for manslaughter. Unable to handle the scandal, Haruko divorced him and left, taking Saki with her. And the visions still kept coming, day and night.

Ruined, unhinged and alone, Takumi waited in the sanatorium cell for everything to end, accompanied only by the monsters that were always with him. Then one day he heard voices outside his cell door. The doctor in charge of him was talking to someone he didn’t know. He couldn’t catch the conversation except for one cryptic sentence: “You know, doctor, he might not be as crazy as everyone thinks he is.”

The door opened and a man dressed in Circle uniform entered and introduced himself as Circle Epsilon Leader Trevor Antoine. The man told him his amazing medical skills could be of use to the Circle, and that they could help him deal with his visions. If he agreed, the Circle might find a way to get him out.

In the depths of his despair, a single thought cut through Takumi’s mind: Saki. He might be able to see his little daughter again.

So he accepted the Circle officer’s proposal. The Circle pulled some strings and assumed responsibility for his actions and treatment, as well as for his pending sentence. He was prescribed a very strong medication to control his visions, and underwent Circle training as a doctor.

It’s been two years since he’s joined the Circle, and he’s slowly finding a place for himself in the organization. The nightmares and day visions are still with him, but as long as he has pills to take he feels he can put up with them. He is constantly unsure of himself, except when he acts as a doctor.

In those moments he is fully aware and efficient, just like he wanted to be when he was a child dreaming of medicine. He hopes that one day these dreams and visions will go away and he will go back to being who he always thought he was. That day he will finally be able to see and hug Saki again.

Takumi Sugiyama is a thin man with straight black hair and Asian features. He is currently thirty-eight years old. He dresses in standard Circle uniform and usually carries a bag branded with a medical logo. A brilliant doctor, he is severely crippled by his mental condition, which manifests itself in his constant visions. It is not uncommon during a conversation for him to start looking behind someone’s shoulder or at the horizon, as if he were seeing something that isn’t there. How scared or disturbed he becomes depends on whether he has recently taken the pills he brings with him everywhere, and that he takes liberally. One wonders what would happen if he ever ran out of pills. When not lost in his visions, Takumi is an extremely intelligent person and an absolutely brilliant doctor. When doing something related to medicine his constant insecurities dissolve. When in combat, he is usually better at finding weaknesses in the enemy and exploiting them via tricks or subterfuge than in direct confrontation.

Takumi’s assistant is Turtygon, a cute and cuddly mini-monster sidekick from a popular V-World animated series for children. Turtygon can barely say anything other than its own name, but it seems to understand everything Takumi tells him, and Takumi understands its growls and body language perfectly, and can have complex conversations with it. People tend to assume that Takumi’s fondness from Turtygon comes from an odd, brainy passion for kids’ shows, but they miss the real reason behind Takumi’s fondness for his Assistant: Turtygon was Saki’s favorite character from the
V-World show. 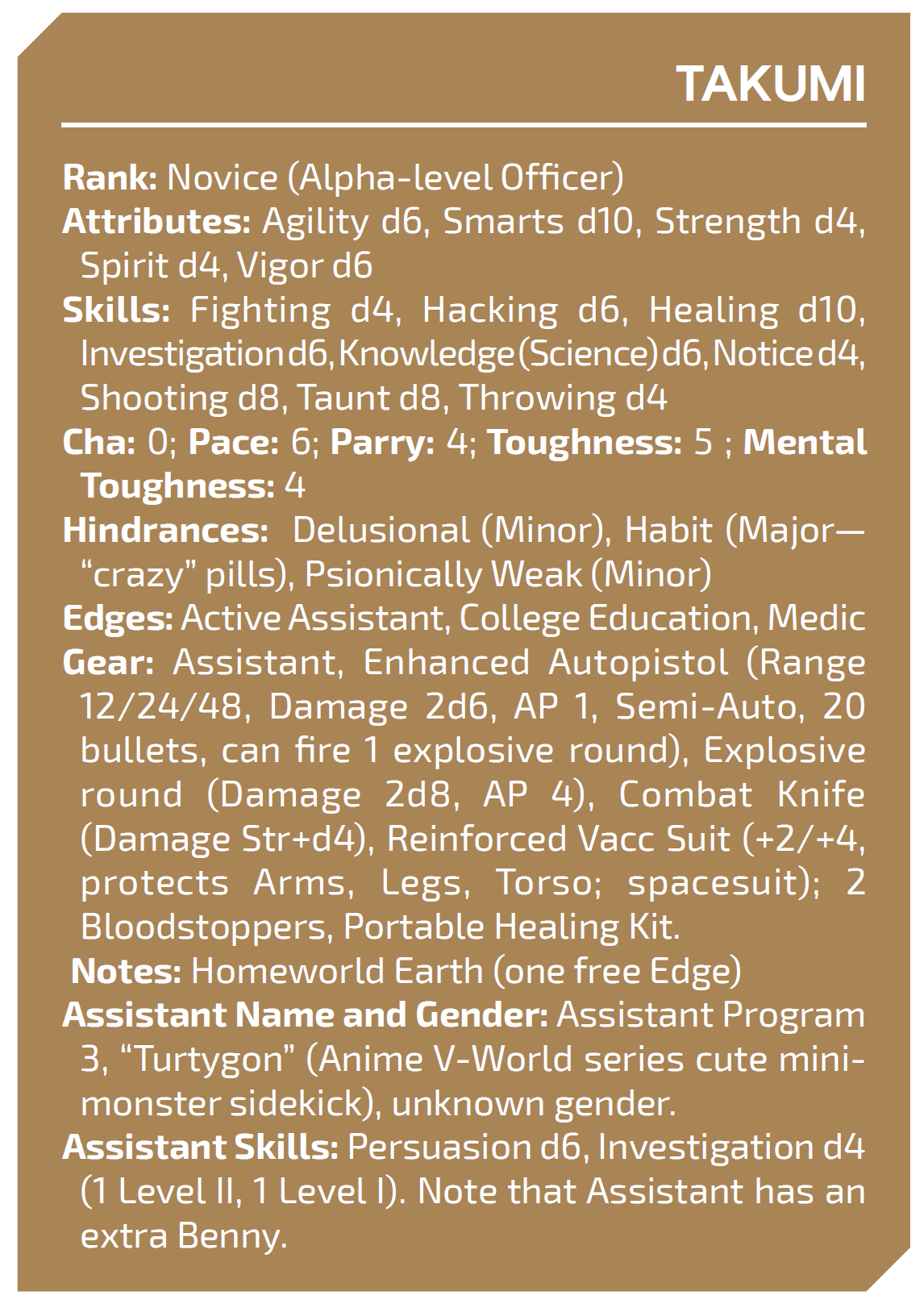 Last month during Gen Con 2018 at Indianapolis we got to chat with Chad Roberts from RPGGeek/BoardGameGeek, and…

Amblin: Crippled survivor of a doomed expedition, and a relic from another time.